Travel in the Sahara desert, Oasis, treks and camel treks

Travel in the Sahara desert, Oasis, treks and camel treks

Algeria tries to increase activities such as hiking in the Sahara in order to make known that part of the world that still seems unknown to all. Equip yourself with good walking shoes and let the guide show you the best hiking trails. For a first trek we recommend one of the best known in the desert of Algerian Sahara and that stretches from Tassili to Issendilène. Trekking lovers will also enjoy trekking tours in the desert coveted by a guide and sometimes with a cook. Enough to make your stay pleasant!

Rather than a hike, if you choose the one on camel, you will be served. Still in the Tassili of the Hoggar, you will be able to see many regs formed of stony plains and its huge statues of stone. You can also choose the visit of the Algerian Sahara in 4×4. Everything seems possible in the desert; you may have the chance to savor a mint tea with local people.

In the south of Algeria are found the essential regions to visit during the discovery of the Sahara. You will find Djanet with the erg of Admer, Tefedest and its mountains, the Hoggar and the Tassili of the Hoggar. These are all regions where you can go hiking, trekking, and even camel ride. You will have the chance to discover the Touareg craft and to taste mint tea before trying surfing on the sand dunes: the sandboard.

Anyway, this stay in the Algerian Sahara will allow you to recharge your batteries and discover some fabulous sites. You will enjoy the calm which reigns there and the warmth of reception of the local populations and that of the region will enchant you to such a point that the preservation of this magnificent place that is the Algerian Sahara would be a priority for you. 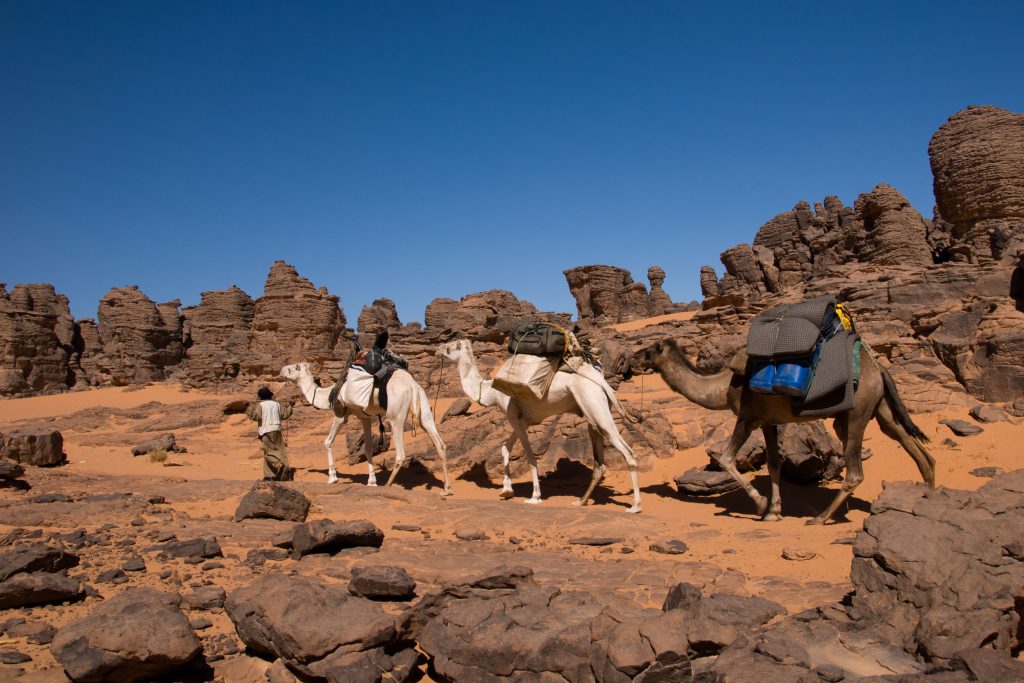 The tassili of the Ajjers (river plateau, in Tamahaq) is located to the northeast of the Atakor. It is a sandstone plateau of 350,000km2 which appears in the sand between Algeria and Libya; it measures about 600m.

The plateau is made up inside and out of a succession of steep cliffs, gueltas carved out of sandstone, narrow canyons alternating with vast circuses of dark regs, “drills of stone” (the irrekanes of Tuareg). The sands piled up at the feet of the columns and the arches bring softness and sensuality in these silent immensities.

A “relic flora” which comes from the Mediterranean sea survives there: oleanders of the Guelta of Essendilene, cypress of Tamrit… 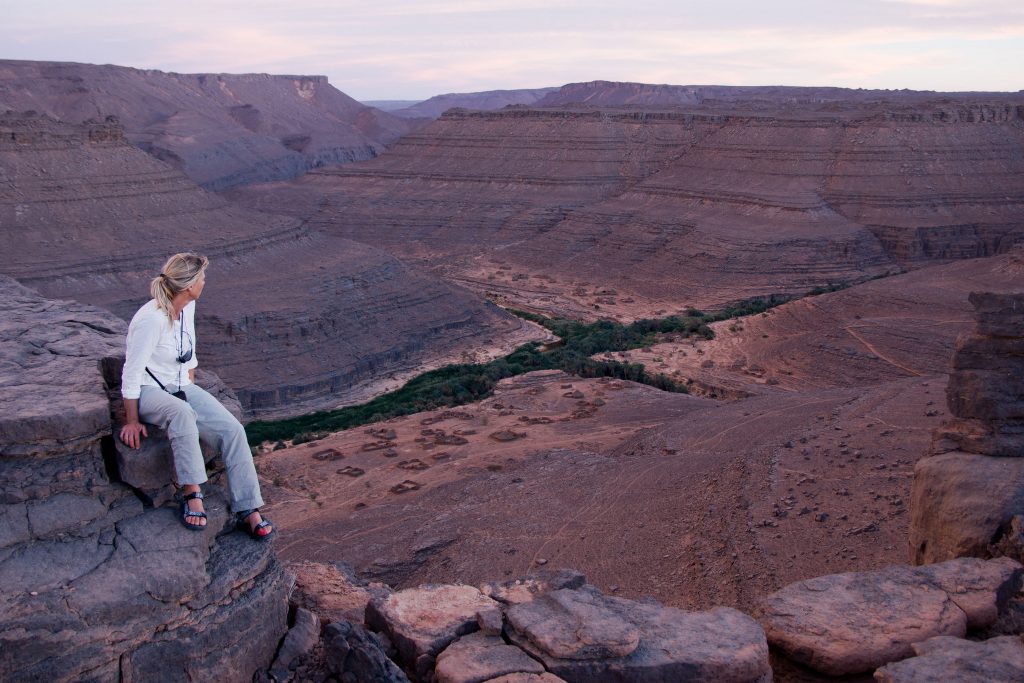 In 1950 Henri Lhote returned the tassili N’Ajjer popular by listing thousands of paintings and rock engravings. The plateau of Jabbaren, although it is not particularly beautiful, arid and rocky, contains about 5000 paintings (departure from Djanet, 20 km to the foot of the plateau, then 15 km of painful ascent) which make it the temple of the cave painting.

The erg Admer begins in the center of the Tassili N’Ajjer, towards Essendilène and continues south to reach the great plain of Tafasset, which flows into the Ténéré, Niger.

The “Pearl of Tassili” is a white town that spreads its palm grove at the foot of the plateau of Tassili n’Ajjer at 1050m altitude. Originally, three ksours suspended above the wadi Idjeriou (“the sea”) were built ten centuries ago to watch over the gardens of the palm grove but today they are abandoned. The production of palm trees (about 30,000) and that of the gardens ensure the survival of the Kel Djanet. 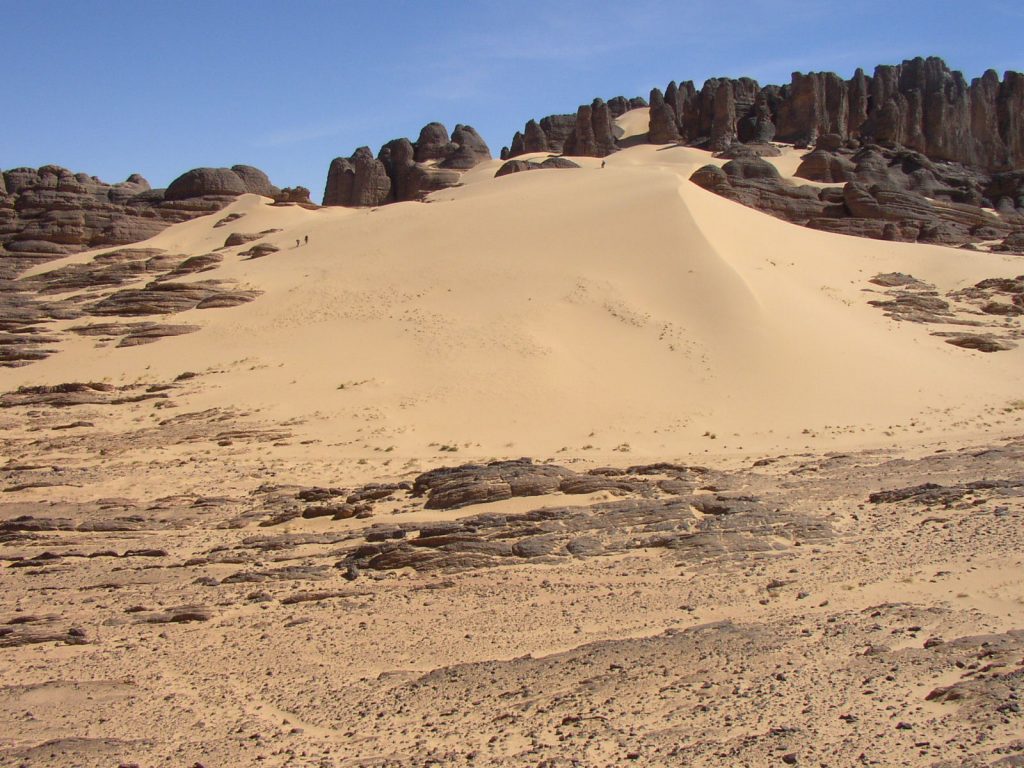 To the south-east of Tamanrasset, the great wadi of the Tin Tarrabin leads to the Tassilis of the Hoggar. It consists of several well separated massifs (El Ghossor, In-Akacheker, In-Tehak, Tahaggart, Taguelmem’tSameden, Ti-Hettan, Tilanfaza, Youf-N’Aghlal, Youf-Ahaket) spreading on 250km and plunge southwest under the sands of Wadi Tagrera. The wadis coming from the Atakor massif cut the eastern barrier which is more fragmented to the west, is inevitably invaded by sand. In the 1970s, the nomads left Hoggar tassilis because of extreme aridity. The hike can only be done with the assistance of a vehicle (water and luggage).

Following the violent volcanic eruptions of the Tertiary and Quaternary, a massif as large as France sprang from the Saharan basement and was named Hoggar (or Ahaggar).

The Akator massif located in the center of the Hoggar culminates at about 3000m of altitude with the Tahat. It extends to the north by the massif of Tefedest, whose illustrious Garet El Djenoun culminates at 2327m. This gigantic set of rock shelters splendid rock sites (mainly around Mertoutek). In ancient times, vast rivers took their springs from this water tower to water the Sahara.

This place remains a privileged place of life because the rainy waters are collected there by the rocks and in the sandy wadis: Oued Tamanrasset will be lost in the sands of Tanezrouft, Oued Tin Tarabin rejoint towards the east the wadi Tafassaset to overlook Lake Chad.

The Hoggar is made up of a disorderly mixture of peaks, towers, domes, needles, pyramids, basalt organs, lava flows frozen in their movement, … having flamboyant yellow colors or even purple black. We can see everywhere large deep valleys between high steep walls.

This central nucleus is surrounded by a set of sandstone plateau: the tassilis, where a mixture of sand and rocks forms, which forms enchanting passages: the Immidir and the ahnet in the north-west, Tin Missao, Tin Rerhoh And Tassili of the Hoggar to the south and to finish the most famous and the largest Tassili N’Ajjer located in the northeast.

The plain of the Amador, situated to the north-east of the Hoggar, is in the form of a large basin in which are deposited enormous quantities of salt which represents the most important wealth of the Tuaregs.

Tamanrasset, with about 40,000 inhabitants, is a large city located 2050 km south of Algiers and at 1400m altitude, covered with tamarisk and horizons of blue mountains. There were only about ten huts in 1905 when Charles de Foucauld arrived.

A vast sea of ​​crescent-shaped sand, the Grand Erg Occidental covers 80,000km2 and is bounded to the south and south-east by the huge high plateau of the Tademaït, to the west by erg er-Raoui and to the north-west by the imposing mountain range of the Atlas. There is a curious difference between the ocher dunes and the depressions of gray sands they surround.

This apparently impassable barrier has always been crossed by caravans which represents the connection between the oases scattered in the sand waves.

Traditionally, treks are made further north from Timimoun where they cross the high sand dunes while making stops in the mythical oases of the Gourara region. In addition, some of the treks go beyond the Gourara and immerse themselves in the regions of Tinerkouk and Taghouzi.

From Adrar to the south, treks take you into the vast dune of the erg Chech and go up north to Béchar via Béni-Abbes (Hermitage of Father de Foucauld) and Taghit, a site entirely extraordinary brimming with an immense ring of orange-pink dunes and planted with date trees on the water’s edge.